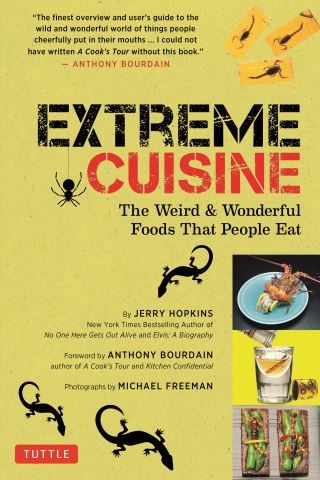 The Weird and Wonderful Foods That People Eat

"I could not have written A Cook's Tour without this book. There is so much I would have missed. So dig in. Enjoy… Eat. Eat adventurously. Miss nothing. It's all here in these pages." —From the Foreword by Anthony Bourdain

Sit down for a meal with the locals on six continents—what they are eating may surprise you. Extreme Cuisine examines eating habits across the globe, showing once and for all that one man's road kill is another man's delicacy!

"I've tried to make this book a guide to how the other half dines and why. Over a period of twenty-five years I've augmented my meat-and-potatoes upbringing in the United States to try a wide variety of regional specialties, from steamed water beetles, fried grasshoppers and ants, to sparrow, bison and crocodile. I've eaten deep-fried bull's testicles in Mexico, live shrimp sushi in Hawaii, mice cooked over an open wood fire in Thailand, pig stomach soup in Singapore, minced water buffalo and yak butter tea in Nepal, stir-fried dog tongue, and "five penis wine" in China." —From the introduction by Jerry Hopkins

Dive headfirst into food culture from around the world. Join author Jerry Hopkins on a culinary and cultural tour as he explores foods that may seem bizarre, and often off-putting, to us. As he says, "What is considered repulsive to someone in one part of the world, in another part of the world is simply considered lunch."

Part travelogue, part cultural commentary and history, and part cookbook (yes, really), with Extreme Cuisine anyone can become an adventurous eater—or at least learn what it's like to be one.